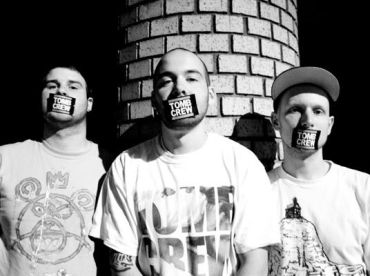 We have had the pleasure of knowing Tomb Crew (in it’s various incarnations) over the past few years. Thanks to their amazing Yo Mama night (which they run with Food Soundsystem) has been the backbone to our london clubbing experience. And even though we have Effect Mode at HDD this Saturday at the Camp, we wanted to shine a light on some of our favourite Tomb Crew releases. Their production credits are deep and incredibly varied so be prepared for a variety of some of their best stuff.

We have waxed on about this jam many times on the site, it even made our top 20 of last year. The interplay between the Mc’s, that rumbling bass, that light keys… blah blah it’s pretty god damn good.

The amazing thing about this bootleg was when they first dropped it in their insane parties at the catch (2nd saturday of the month at Catch bar). First of all this was at the height of Beyonce fist pumping movement, in a packed room with tons of women going crazy only to be shocked when the Pharoahe Monch bit drops in. The hip hop fans in attendance just lost their minds though.

On their Trouble and Bass Ep from last year Tomb Crew showed that not only we they adept at creating a wicked ep full of amazing bass lead stormers but were great at naming tunes as well. My favourite cut off the Ep is this acid house inspired rumbler. I defy you to sit at your desk and not want to sway along to the air raid sirens and those day glow keys.

In trying to find this forgotten gem on the net it made me sad that more people didn’t catch on to this as they should have. The Portugese (i’m assuming bazilian mc) chanting to that drum breakdown leading up to the horns into that rolling bass is a prime example of all the things that we love about Tomb Crew. Do us a favour and don’t download this track from this fools soundcloud.

A lot of Tomb Crew’s work is either sample lead or Mc driven, this is one of the times that a female vocal takes centre stage. With Alex’s haunting ,almost childlike voice of top of that menacing theremin sounding bass was the soundtrack to many a cold night’s bus journey home.