We don’t know what’s exactly in the water right now but various influences came together at the same time for this riddim mix to happen. First of all you have Spooky‘s Coolie Joyride EP out on Oilgang records, look out for the refixes especially the Samename one. Then you have Spooky’s mix for Mixpak where he showcases his favourite examples of Grime and Dancehall meeting up. You also have last year’s 10 year anniversary of Grime, Oil Gang’s reggae mix he sent us, Slackk and Murlo’s work ethic and Natalie Storm Boys for Breakfast being used by Adidas for their latest campaign(see above). Then there was the tease that we are finally going to hear the sequel to Showa Eski called Showa Step. All of it combined to make us want to do a riddim mix combining the two riddims and cuts from Donaeo, Kano, Ward 21, Natalie Storm, Einstein and the man himself Wiley. Shout out to Commander B for making Pum Pum riddim and Prodigal Entertainment for the riddims themselves.

From the people behind Wiley’s Numbers In Action video and Dels Shapeshift and Trumpalump videos, comes Wiley’s Boom Blast (they also had a part to play in Nokia’s loop promo featuring Warrior One) Us Design are concept kings when it comes to music videos, playing on lyrics and human interaction to bring their videos to life. The Boom Blast video is no exception, simple concept excellently executed. Look out for the cameo by HDD’s Hootie Who. Boom Blast will be available to buy on January 19th as part of Wiley’s Evolve or Be Extinct album.

Not much to say, just a small collection of clips featuring tracks you can hear Vybz and see Wiley in the studio on another beat that isn’t his new single. Probably going to need to hear the whole thing before passing judgement. I do think that the last lp had underrated tunes on there that people overlooked due to how big Pon De Floor was.

I held off on posting this not because it isn’t good, it’s amazing, but just because it is so good as a teaser. For the next edition in the “Showa” series Wiley, Einstein, Joell Ortiz and Wayne Marshall join up for what seems to be a beast of a track. Cyaan wait for this to drop finally, it’ll be out soon on Prodigal. 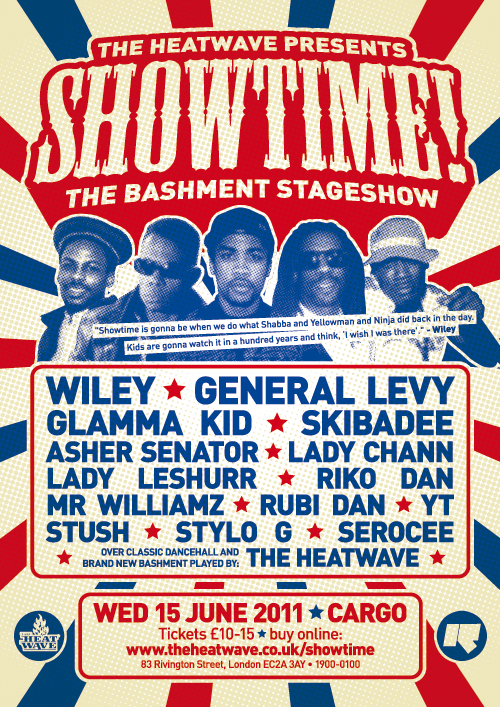 The Heatwave really pulled out all the stops on this one. A live bashment showcase with some of the biggest names around regardless of genre. With a list like this you tend to have a look and see how is going to be a weak link (not maliciously, but you just do, its human nature) and i say with no sense of hype that there are no Mc’s on that list who aren’t worth their place on that stage.

Come on when are you going to be able to see Wiley share the same stage as YT, Asher Senator and Glamma Kid? It’s not going to happen unless something big was going to pull them together on the same stage. You could probably make a film about how the Heatwave got them all together (a more uk version of that Dave Chappelle/ Michel Gondry flick).

All of those artist coming on stage and spitting over classic dancehall and bashment, even for the non dancehall fan that has to be enticing. If you dont believe me why don’t you check out Serocee and Rubi spitting over those sort of records on last week’s Heatwave show?

And all for the price of £12/£15, which is less than the price of entry to a central london club, less than half a ticket for a Wiz Khalifa or Wu Tang concert, less than the price of some future beardy convention music night thing. Basically it’s a great price for such a unique event. I do hope that you guys go because maybe if it’s sucessful it could be the start of something great. Maybe it would morph into a uk version of Rock the Bells.

Eski boy is back with quite possibly the best video he has ever done…. (seriously have you ever seen pies?). Directed by our good friends over at Us design studio, it shows Wiley at his best rhyming and actually looking like he enjoyed himself. Its a simple (although i’m sure very hard to make) video but lays bare how good a rapper he is and hopefully will be a great indicator of how good his future music could be.