WTF is not another horrible yank pop dance group a la LMFAO (which apparently stands for Loving My Friends And Others), instead it’s a supergroup consisting of Future Fambo, Wayne Marshall and Tifa. All of them give us various reasons why they are Swaggin on this Washroom production. You might remember the riddim (actually called Swaggin) being the backdrop for Sean Paul’s Raving.

The video is pretty good and highlights the punchlines of each of the artists. Tifa does get a little “minaj” but the super mario drop near the end makes up for that. Who knew Wayne Marshall could do a slick Rick esque rap voice? The swagging tees look good as well. 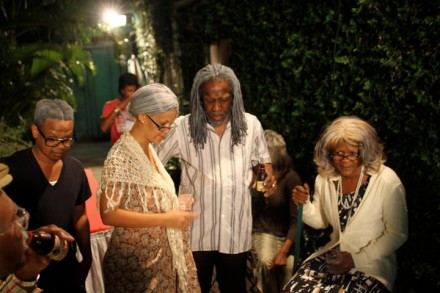 The Matrimoney movie is definitely the best medley video this year (sorry Barmitzva riddim). The riddim is brought to you by Washroom Entertainmentand features cuts by Wayne Marshall, Future Fambo and Sean Paul, Lady Saw, and Tifa.

What makes this video stand out is the excellent execution of a very simple idea which reflects the riddim, and the interaction between the artists as they move through the different cuts on the riddim. We also love seeing the stars as older versions of themselves.

Matrimoney is available to buy now.

I held off on posting this not because it isn’t good, it’s amazing, but just because it is so good as a teaser. For the next edition in the “Showa” series Wiley, Einstein, Joell Ortiz and Wayne Marshall join up for what seems to be a beast of a track. Cyaan wait for this to drop finally, it’ll be out soon on Prodigal.