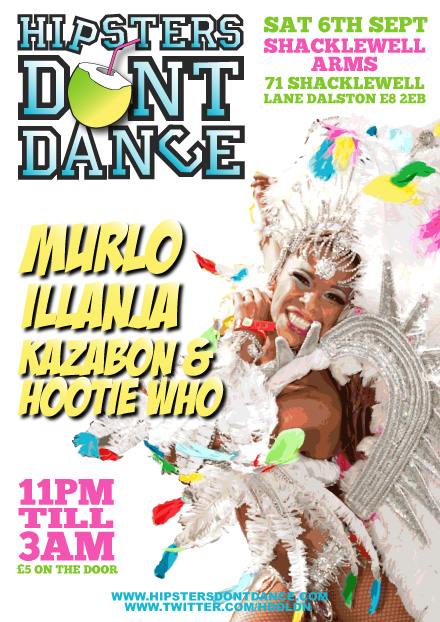 Carnival may be done but the vibes cyah done at Hipsters Don’t Dance so join us this Saturday September 6th at The Shacklewell Arms where carnival continues and we will shake off those post canrival blues!

Residents Murlo (Mixpak), us (Kazabon & Hootie Who ) and Illanja will make sure to get you bogling, dutty wining and palancing! Fête Hard or Go Home! Remember to bring your whistles and flags, we don’t know about you but we definitely didn’t get enough carnival this year so we will be making up for it on Saturday.

£5 on the door all night or email us to get on the £3 cheaplist (guarantees £3 entry before 12am).  More info on the Facebook event page. 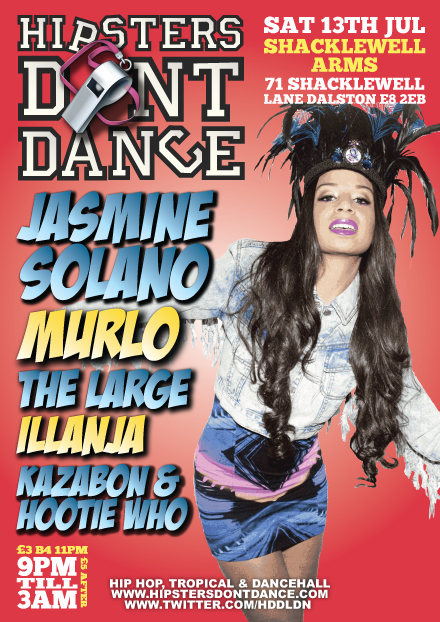 It’s July and the summer is finally here, it’s time to do like Lonyo and sing about the Summer of Love rather than Carl Thomas and Summer Rain. Back at the Shacklewell Arms this Saturday for another World Carnival party we are joined by special guest Jasmine Solano. If you don’t know about Jasmine, you will soon enough. Part of New York’s Electric Punanny alongside Melo- X ( who share our love of all things Dancehall and Soca), she is known for her fantastic DJ sets, having DJ’d across the world alongside the likes of Kendrick Lamar, A Trak, and Dre Skull. She even djed for Beyonce’s album release party in Harlem and was the official dj for Wiz Khalifa’s Deal or No Deal Tour. When she is not making Queen Bey shake a tail feather, she hosts a weekly radio show on New York’s famous Radio Lily. Oh and on top of all that she is an artist in her own right, releasing an EP last year to much acclaim.

Also on the night we will have residents Murlo, The Large, Illanja, Kazabon & Hootie Who playing Hip Hop, Dancehall, Soca, Afrobeats and everything in between. We will be partying from 9pm til 3am and entry is £3 before 11pm and £5 after. Save yourself some cash and add your name to the cheaplist by emailing names to hipstersdontdance@gmail.com this guarantees you £3 entry all night (list closes at 5pm on Saturday 13th). In the meantime get this mix from Kazabon & Hootie Who through your speakers and get ready to wuk and wine!