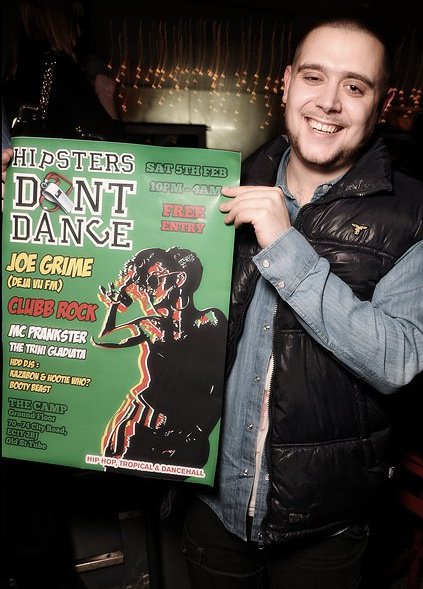 What can i say about Joe Grime that hasn’t been said before? We all know that he is a great dj, you can hear him on Deja Vu every week. He’s also one of the nicest people in the scene and through chats with him he has such an interesting and eclectic path to where he is now. This Saturday it’s his brithday bash at Aston’s Wine Bar with a crazy line up. I caught up with Joe to chat about his plans for the summer, his Serocee remix and his special HDD Mix that he did for us.

How long have you been djing, how long on deja vu? What other things are you involved in?

My Name’s Joe Grime, started Djing 13 years ago at the tender age of 12 with one red Kam belt drive deck and an old tape deck. I used to play UK Garage until it turned into Grime, when I decided to follow my heart and play dancehall & reggae music (the first CD I bought when I was 7 was reggae 93, which had the likes of Barrington Levy’s “work” & Junior Tucker’s “Love Of A Lifetime, so it felt right)

I’ve currently been Djing of Deja for just over a year; although I’ve presented on radio since I was 18 (I Started on a radio station called Hav It Fm where I spent 5 years, before moving on to West London’s Community radio station Westside FM for a year)

Away from the dancehall/reggae music; I do a lot of work in theatres, I am resident DJ on comdey game show ACTing Up & have worked on numerous other shows. I teach Djing & music technology at various schools & community groups & have spent many years alongside my Dad building up an impressive sound system which I love to string up & play on.

Let’s talk about this Hdd mix, what inspired you to make it?

Well I always liked to push the boat out on mix cds I put out; but I think I set the bar high when you guys held a Ustream session a couple of months previous. It was the first time, away from when I play on my sound or make CDs that I had used my “Bashment Piano” and after everyone had heard me do that I decided that the HDD mix had to made!

The Rice and Peas mix series is about to see its third version released, what draws you back to this sort of reggae again and again?

There’s a number of reasons. The series came about on the back of a legendary radio show (If I do say myself) which I used to present on a sunday afternoon called the Rice & Peas/Roast Show which was strictly reggae music along that vibe.

I have always loved the old stuff and having grown up playing at every house party I could get to soon realised that if a young white boy could buss up dance full of sceptical elders who knew their music I must have been doing something right and it was time to put out a double CD mixed the way I do & response was mad!

Also you really can’t beat certain tunes, artist like Garnet Silk & Beres Hammond why would you not been drawn back. I heard the album of Beres covers that was released recently & maybe with the exception of one or two, no one came close to touching the track in the same Beres had. For Me its the exploration; I’m addicted to educating myself on the music and the more you teach yourself the more there is to find. A good example is Lovers rock; I remember bussing Janet Kay’s Silly Games at a big people dance thinking I was clever. Next thing I know I’m getting asked for this tune & that tune and looking like an idiot. I went straight home and found the tunes and educated myself. Now when I play lovers I could have most peoples parents whining the wallpaper of the wall if you get what I mean

You are heavy on the blends, what are you looking for when you create them?

I often don’t look for anything if I am honest I just enjoy manipulating music; but you can always hear if your on to something and its when I hear that I then tend to try and hone in and make a good blend. It dont always work (my HD is full of examples) but when it does it’s so satisfying. I especially enjoy it when the things you don’t expect to work end up sounding bad! Or when you take the listener by suprise.

With the recent Serocee remix, you brought that old school feel to a summer party track. Don’t get me wrong it works just curious why you tried it?

As I said I love to manipulate things. Serocee asked my for dancehall reggae mix. So after testing a few other angles it was clear that having Sero chatting double time on a slower riddim worked. I then tried it on a few riddims inclduing the original murderer version; and then it hit me to use the dubier version. I honestly didn’t expect the reaction to be as positive but it has done really well and is getting airplay across the globe. Hopefully will get clearance & I can make some money (lol)

Your bday celebrations are on the 28th with a crazy line up, who are you excited to see?

I’m excited about everyone, because its always a mad night, Its also nice to get back together with my old sound members Slamma & Babycham. I’m Also looking forward to Chuckie’s set cos they are always bad, he holds the crowd with some wicked hip hop anthems. I’ve also heard some rumours that we got some big Pas on the night. Too be honest I’m just looking forward duppying the dance! Last birthday bash I had I had what me & my sound members call a “rodi moment” where I picked up the mic and started playing tunes like I was in a sound clash! I remember that because the crowd nearly pulled down the air conditioning unit, balling for reloads.

Apart from your weekly radio show where else can people catch you playing this summer?

Well obviously make sure everyone gets down to the birthday bash at Astons. I got Overproof & Bang Bang in the next few weeks & then it’s a summer of madness including (finger crossed) Notting Hill Carnival & few trips abroad. Also I’ve got the new CDs on the way which will include the new edition of Rice N Peas, a remix CD along the lines of the old Breakdown CDs & probably another edition of Life Of Grime.