Over the past 3 years the RBMA and Major Lazer Carnival party has become one of the musical highlights of the year. From it’s small and inauspicious beginnings to last year’s guestlist spots being snapped up in 10 seconds, the party has moved from strength to strength. Some people might only be going for the free booze and food (nothing wrong with that) but the carnival line up has always boasted the best DJ’s and producers around. The event for us has been an opportunity to see some of our favourite dj’s up close. On the eve of the guestlist being open (11th august 10 am) here are some of our favourite moments from the last 3 parties.

Palancing to Poirier (2010)
For many last year;s Carnival was all about Vybz Kartel’s Clarks, however there was a soca anthemn that was the true star of the show. When Poirier (backed up on the mic by Face- T) dropped Palance a small group of us rushed up the stage to do the dance. When we caught up with Poirier after his set he told us he was dying to play that tune and was glad that people appreciated it.

An introduction to Jillionaire (2009)
Neither of us had heard much of Jillionaire prior to that years event, by the end of the day we would definitely remember him. First of all he brought a wicked soca selection to the party dominated by the latest dance music. The crowd may have been sparse at this time but during his set his humour shone through as he tried to coax more people into dancing (especially the ladies). Even when not djing he would appear on stage and start showering the crowd with Maryland chocolate chip cookies. Only Skerrit Boy jumping off the ladder prevented more people from remembering the topless trini man in red jeans with a massive afro skanking out with girls on stage.

Toddla T, Lady Chann and Serocee (2010)
It’s rare that you can find a piece of footage of a dj that you like, doing something truly amazing whilst you are completely lost in the moment. Luckily for me someone else was recording when Toddla teased the crowd with 138 trek over and over again. Chann and Serocee worked wonders on stage getting the crowd sufficiently amped for Major Lazer who followed.

Santigold singing Creator (2008)
The first Major Lazer party was more low key than the others, presumably before the hype spread. The intimacy of the event allowed you to truly soak up the atmosphere under the westway. It was all a new experience, tubes whizzing by, your favourite artist and dj’s mingling in the crowd and free booze on tap. The best moment of that year was Santigold rocking up and singing Creator to a crowd who was in awe.

This Picture (2010)
This is how much fun we were having, see if you can spot any familiar faces. 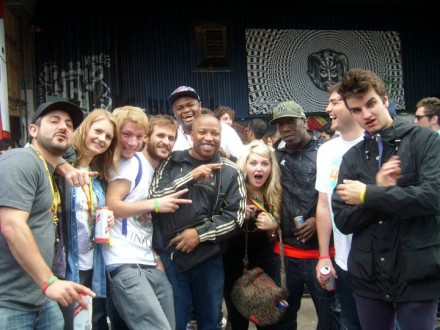