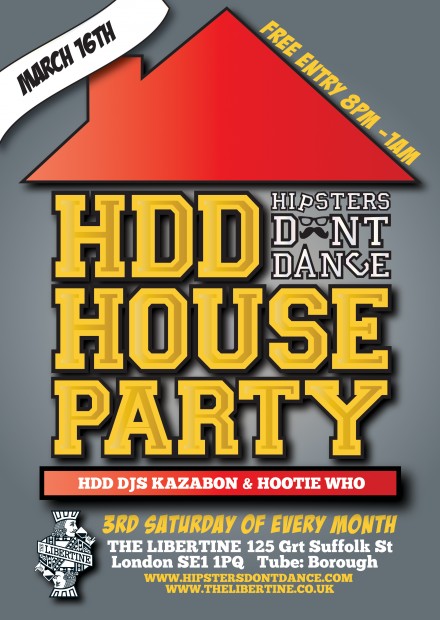 It’s that time again; we are back at The Libertine Pub in Borough this Saturday March 16th for more warm up vibes. Come and join us for the best house party in a pub in the whole of London. Kazabon & Hootie Who will be providing you with a soundtrack of party starters to get you in the mood for clubbing. Hits from Hip Hop, Dancehall and R’n’B will get your Saturday night kicked off correctly whether you are catching up with friends over pizza and drinks or getting ready for a night of raving and misbehaving! Check the facebook event page for more details.
You can also listen to a taster of what HDD House Party is like with this 2 hour recording of our set from last month. Put it on at work and have a sly little dance to this.

Welcome back to the third HDD House Party, our podcast series exploring all of our favouirte genres, this time it’s the Bridges and Hooks edition. We are joined by one of London’s best dj’s Southern Hospitality‘s Rob Pursey. In this podcast we chat about our favourite Hooks in Hip Hop, why they are important and the growth of singjays in the genre. Rob, Kazabon and Hootie Who each did a 20 min mix with their favourite hooks and bridges in the genres spanning the 30 year history of Hip Hop.

You can catch Rob Pursey all over London, make sure you check the Southern Hospitality website for more information. Tonight (20th April) he is starting a new night called the Re : Up at the Old Queens Head.

Welcome back to the second HDD House Party, our podcast series exploring all of our favouirte genres, this time it’s a soca edition. We are joined by Murlo and So Shifty for a chat and a live guest mix from each of them. Both of our guests explore the different sides of soca Murlo takes on the 160 BPM power soca whilst So Shifty delve into their crates for a classic groovy soca mix. Hosts Kazabon and Hootie Who explore their favourite soca songs of the moment and the uniqueness that is soca.

Murlo has a new EP out of his bandcamp page and of course you can catch him at Hipsters Dont Dance as well as a ton of other places. So Shifty are constantly putting out great music which you can check out on their soundcloud. You can also check out their weekly feature on our site #unfuckwithable.

HDD House Party, the first in a series of Podcasts from Hipsters Dont Dance has finally landed. Our first ever one is the Hip Hop edition. We are joined by Jamie from Effect Mode and Nick from Yo Mama for a chat and a live guest mix from each of them. Jamie’s Mix highlights the Boom Bap sound that influenced his new hip hop project Effect Mode mixed with some of the new stuff that he is into as well as some exclusive Effect Mode tracks, whilst Nick’s mix highlights the different faces of the successful monthly club night Yo Mama. Hosts Kazabon and Hootie Who explore the hip hop that influenced them, whether it be the soulful stuff or the Ragga Hip Hop sub genre respectively.

In keeping with the tradition of that era, you may be hearing some hiss and pops in the recordings. Just imagine you shoved a tape into your laptop.